A 66-year-old man with pancreatic cancer developed an anastomotic leakage of the pancreaticogastrostomy 15 days after pylorus-preserving pancreaticoduodenectomy. An easy-flow drain was identified endoscopically in the extraluminal cavity.

Two-sided sponge (TSS) treatment was initiated [1] . A gastric tube was attached to the outer end of the drain with adhesive tape (Opsite Flexfix; Smith & Nephew Medical, Hull, UK). The drain was then grasped inside the cavity with a forceps (foreign-body removing forceps; MTW Endoskopie Manufaktur, Wesel, Germany) ( [Fig. 1] , [Video 1] ). The drain was orally removed, with the gastric tube still attached to its end. The TSS (Braun, Melsungen, Germany) ( [Fig. 2] ) was connected to the gastric tube by adhesive tape, and was drawn into the cavity by pulling the abdominal end of the gastric tube. The oral end of the TSS tube was nasally diverted ( [Video 1] ). Both ends of the TSS tube were connected to a vacuum pump (− 30 mmHg). 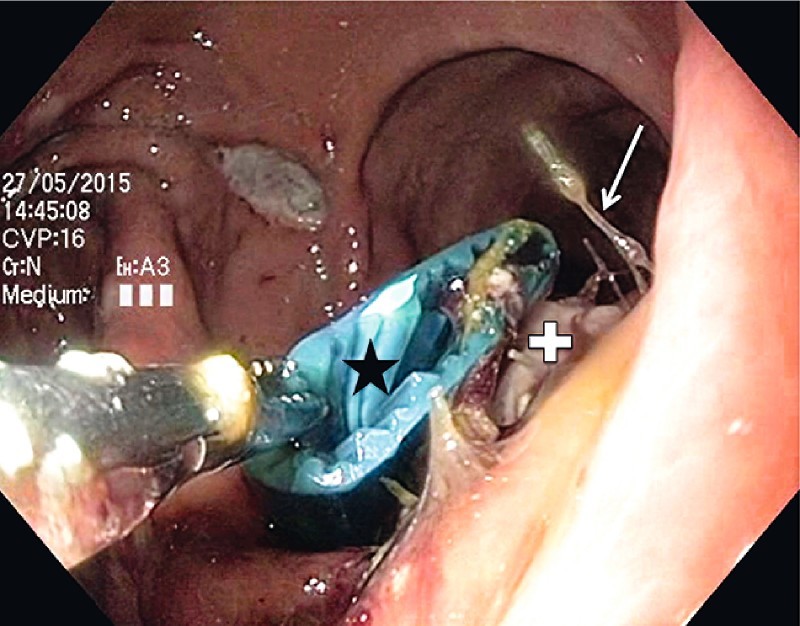 Fig. 1  Two-sided sponge (TSS) treatment of anastomotic leakage after a pancreaticogastrostomy. A conventional gastric tube has been attached to the outer end of the easy-flow drain. The drain (star) is grasped inside the cavity with an endoscopic forceps and removed through the upper gastrointestinal tract via the mouth. Arrow, anastomotic threads; cross, pancreas. 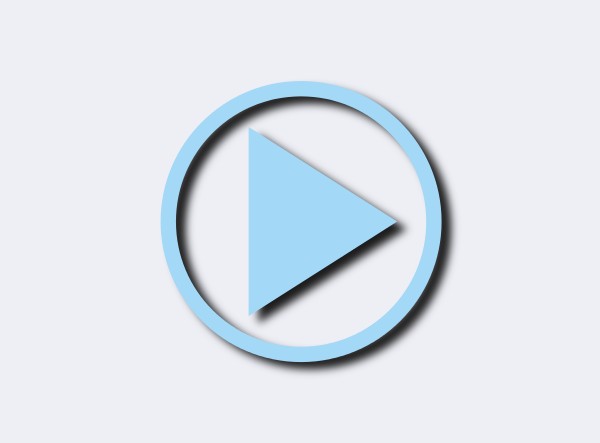 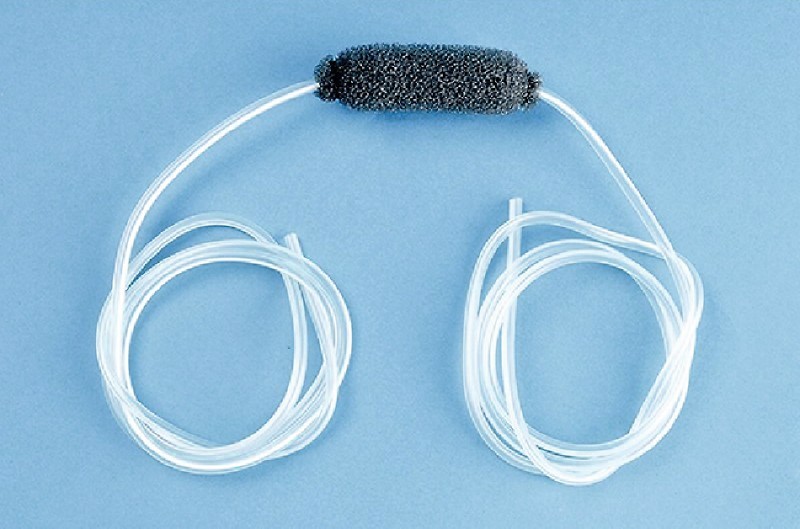 Fig. 2  The prototype two-sided sponge (TSS). The sponge for endoscopic vacuum treatment is mounted centrally on a 160-cm tube. (Source: [1] )

When the TSS was changed at day 5, a clean cavity was seen ( [Fig. 3] , [Video 1] ). At day 9, sponge-induced granulation tissue was seen ( [Video 1] ). A rubber drain was introduced ( [Fig. 4] ) to promote the formation of granulation tissue and thus definitive healing. At day 12, only a fistula opening persisted ( [Fig. 5] ). The rubber drain was successively drawn back over the next days.

Fig. 3  First change of the two-sided sponge (TSS) at day 5. a The first TSS in situ before removal. The sponge extends partly into the gastric lumen. b The well-granulated and clean cavity of the insufficiency after removal of the first TSS. Star, abdominal TSS tube; arrow, thread. 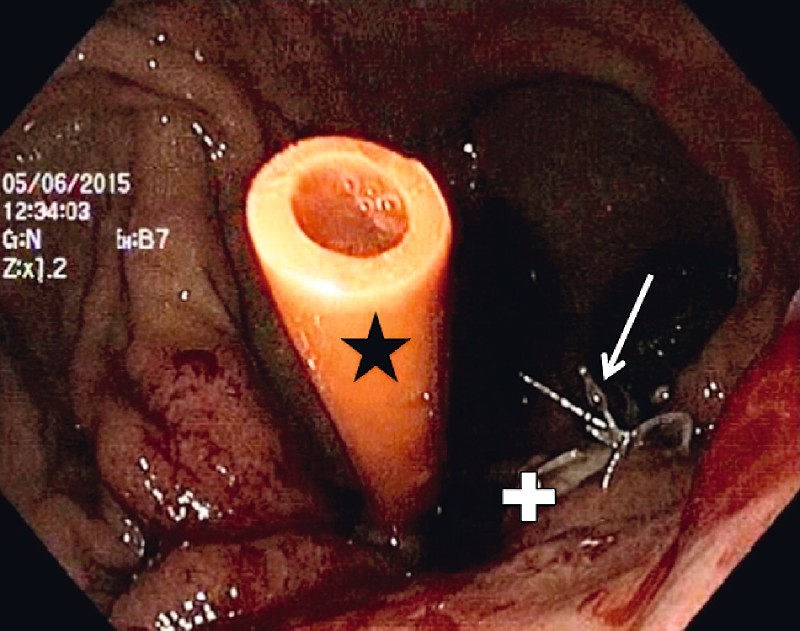 Fig. 4  Introduction of a rubber tube (star) into the remaining cavity after two two-sided sponge (TSS) changes, at day 9 after initiation of TSS treatment. The tube is being pulled from the stomach into the cavity. The same technique as for TSS placements was used, with the rubber tube being attached to a gastric tube, to lead the rubber tube through the upper gastrointestinal tract and the cavity to the abdominal surface. Arrow, anastomotic threads; cross, pancreas. 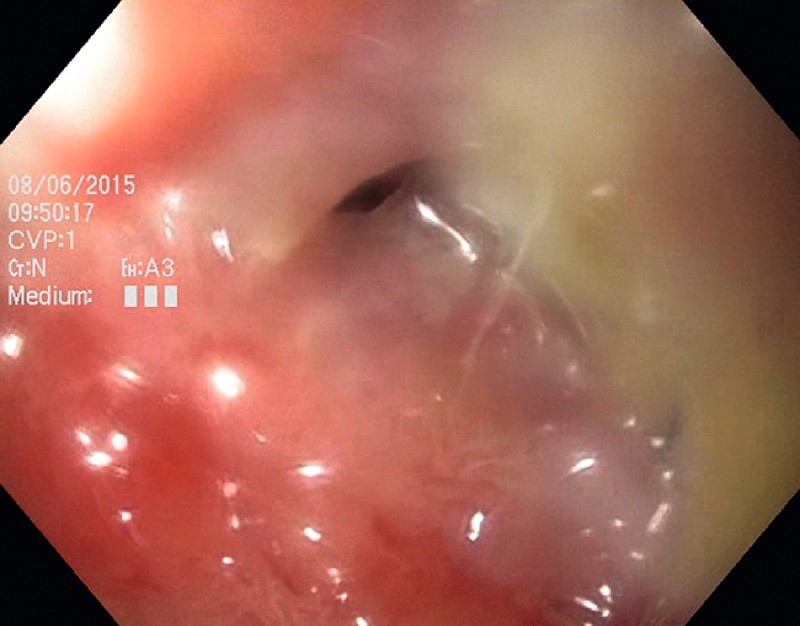 Fig. 5  After 3 days (day 12), only a fistula opening persisted and the cavity was no longer endoscopically accessible. From that point, the rubber drain was successively drawn back externally.

Rectal endoscopic vacuum treatment (EVT) with the Endo-SPONGE is well established. Recently a comparable system (Eso-SPONGE; Braun) has been launched for upper gastrointestinal leaks [2] [3] . The sponge is placed similarly, via an overtube.

Given the diameter of the overtube, leaks have to reach a diameter of 17 mm (manufacturer’s specifications for the smaller Eso-SPONGE version). For smaller anastomotic insufficiencies, sponges may be mounted individually on a gastric tube [2] [4] . Introduction into an extraluminal cavity using an endoscopic “backpack technique” is demanding [5] , and also it is difficult to access angulated entrances because of the stiffness of the overtube. Use of the TSS ( [Fig. 2] ) may simplify these challenges [1] . The sponge is pulled to the target site, which is easier and faster compared to the backpack technique. However, an accessible drain in the extraluminal cavity is required ( [Fig. 6] ).

Fig. 6  A posterior–anterior view of a two-sided sponge (TSS) placed in an anastomotic leak following pancreaticogastrostomy. The sponge is introduced into the extraluminal cavity by pulling on the abdominal end of the TTS tube. Precise sponge adjustment is easy because the sponge can be moved bi-directionally by pulling at the oral or the abdominal end of the tube (pendular movement). This procedure is easier and faster compared to the “backpack technique” or the over tube placement of an Eso-SPONGE. However, this technique is only applicable when there is an accessible abdominal drain in the extraluminal cavity. (Source: [1] )

In anatomically difficult situations the TSS might simplify and extend the therapeutic EVT spectrum.

All authors declare no conflicts of interests for this article.