The demand for quality control in endoscopic procedures is gaining force in most European countries, and this justifies the preparation of good practice guidelines for such procedures.

In any endoscopic procedure, the following questions should be asked:

The demand for quality control is of course growing among academic teams involved in the training of young endoscopists, but it is also a matter of concern for experienced endoscopists, for the following reasons:

In the past, the series of films taken during barium radiography of the stomach or colon was maintained in the patient's file and made available for interpretation by other practitioners. However, the use of gastrointestinal endoscopy has spread in most countries without any guidelines being prepared for a systematic list of images suitable for the procedure. Video recordings have often been made in Western countries, but these have focused on images of a detected lesion or the various steps of a therapeutic procedure, without being related to systematic recording of all procedures (including negative ones). However, in Japan, the practice of recording images has developed following a rigorous method: first with gastrocamera exploration, and then with fiberoptic and video electronic endoscopy. Some 20-40 images are collected for an upper gastrointestinal endoscopy. Nowadays, keeping records of endoscopic images is easy using a video printer, but direct capture on the computer hardware linked to the processor is also possible, allowing classification of images and patients, as well as allowing images to be included in the patient's records. Endoscopists must get back into the habit of recording images using a systematic protocol. Printing out large numbers of photos could give rise to financial difficulties and could become a source of further debate with health-care providers; a major advantage of storing digital images in the computer is that it can be done at no cost once the computer has been installed.

The objective of the European Society of Gastrointestinal Endoscopy (ESGE) is to promote this practice in European countries and to make the images available for communication to the patient or to the endoscopist's colleagues (general practitioners or surgeons). The ESGE is now recommending that a minimal checklist of images should be introduced into the code of good practice; this list is being mailed to all European endoscopy societies, and the ESGE is requesting the boards of the national societies to promote the communication of these recommendations to their members.

How to Take a Correct Endoscopic Image

It is very easy to take multiple images with electronic video endoscopy. In order to obtain a correct image, practitioners should always:

It is important that reports on upper gastrointestinal endoscopy should include a certain number of illustrations that will allow checking that the whole of the esophagus, stomach, and duodenum has been examined thoroughly. Electronic video endoscopy allows images to be taken easily during the endoscopic examination, using either a video printer or a system that captures images directly onto the computer's hard disk.

The anatomic locations the ESGE recommends in order to optimize the endoscopic examination report are listed below.

Image 1: Upper esophagus image taken about 20 cm from the incisors to obtain a forward view of the esophagus.

Image 2: 2 cm above the squamocolumnar junction (Z line). This endoscopic appearance is particularly important for confirming that a careful study of this area has been carried out, and to locate anomalies accurately, particularly in the case of esophagitis or Barrett's esophagus.

Image 5: Angulus in partial inversion. Positioning the endoscope in front of the angulus provides confirmation that a complete examination of the antrum, angulus and fundus seen in inversion has been performed.

Image 6: Antrum. The whole of the antrum is visualized with this image, assuming that the angulus has just been examined as described above.

Image 7: Duodenal bulb. The image should be taken with the endoscope positioned on the bulbar side of the pylorus in order to see the entire bulb.

Image 8: Second part of the duodenum. This confirms that a complete examination has been performed, with the end of the endoscope positioned near the papillary area. 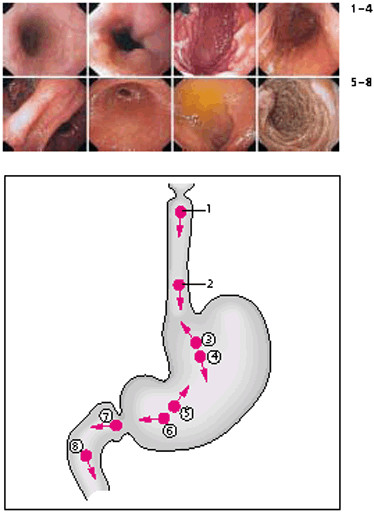 It is important that reports on lower gastrointestinal endoscopy should include a certain number of illustrations that will allow checking that the whole of the colon has been examined thoroughly. Electronic video endoscopy allows us to take images easily during the endoscopic examination, using either a video printer, or a system of image capture directly on the hard disk of a computer.

The ESGE proposes that eight images should be taken to illustrate the examination in its totality. Of course, complementary images should be taken in the case of specific lesions. As far as the colon is concerned the exact position of the tip of the endoscope is often difficult for the operator to identify. The reference points given here will thus be approximate ones, with the exception of the ileocecal valve and the appendiceal orifice.

The anatomic locations the ESGE recommends in order to optimize the endoscopic examination report are listed below.

Image 2: The middle part of the sigmoid. This illustrates the most common sigmoid diseases, particularly diverticulitis, while taking into account the fact that the site at which the image is taken will inevitably be fairly approximate.

Image 5: The transverse colon before the hepatic flexure (liver seen by transillumination). The hepatic flexure is another reference point that is usually easily identified confirming the examination of the colon up to this point.

Image 7: The ileocecal valve. This is a fixed reference point situated on the ascending colon.

Image 8: The cecum, with visualization of the appendiceal orifice. The cecum image confirms that the examination is complete and that the portion situated below the ileocecal valve has been examined.

In upper gastrointestinal endoscopy the successive pictures taken are numbered according to the progression of the endoscope from 1 to 8: the highest number points to the most distant sector reached. The same policy is adopted for colonoscopy and the highest number also points to the most distant sector reached. In this situation, the successive pictures taken during the withdrawal of the endoscope will be numbered in decreasing order from 8 to 1. 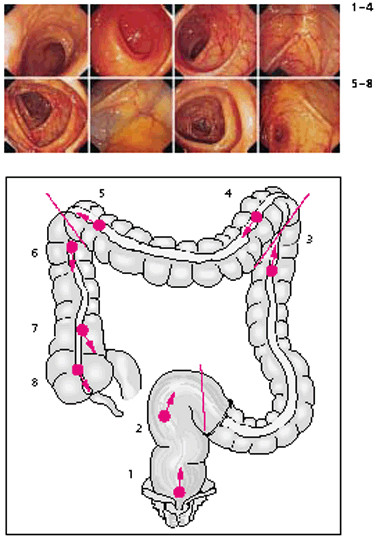